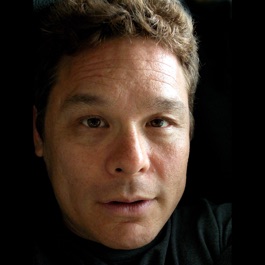 
DIRECTOR CO-SCREENWRITER - GRAFFITI   A half hour dramatic film produced at the American Film Institute.  A young man who lives in a military dictatorship, sketches illegal drawings on walls for thrills.  "Matthew Patrick's GRAFFITI is the best short film we've seen.  It packs more beauty and power into twenty-eight minutes than most features do in a couple of hours."   AMERICAN FILM MAGAZINEArticle:  TEN PEOPLE TO WATCH

DIRECTOR  -  HIDER IN THE HOUSE   Psychological Thriller starring Gary Busey, Mimi Rogers and Michael McKean.   Executive Produced by Steven Reuther and Diane Nabatoff.   "A well crafted story about a dangerous mental patient who hides in the attic of a beautiful house.  Though on paper it sounds too daft to be true, the way the tale unfolds it is all too plausible.  Well-acted and real hide-behind-the fingers stuff.  Builds to such a pitch that I jumped sky-high."   TIME OUT     HiderInTheHouse.com

"This neat little thriller directed by Matthew Patrick makes a valiant effort to conceal the killer's identity and keep the level of interest high as one revelation after another sets the pendulum swinging between suspects." CINEFANTASTIQUE.  TaintedBloodMovie.com

DIRECTOR / PRODUCER - ATRAPADOS (TRAPPED)    "Fascinating indie fantasy film," VARIETY.  "An apocalyptic,    science fantasy."   Independent feature film made on a shoestring budget by my company, Panorama Productions Inc.   Dark, arty work done when I was in my early 20’s.  2 strangers become trapped following the unexpected collapse of a building.  "Colorful, mysterious and unlikeHe  anything you’ve ever seen." LA TIMES.
Premiered at the 8th Telluride Film Festival and selected to represent the United States at the 26th San Sebastian Film Festival, Spain.  Invited to screen at The Museum of Modern Art, New York.   AtrapadosTrapped.com

DIRECTOR / PRODUCER / WRITER  -  THE RED CHALK, interactive narrative web movie about a man who finds a magic chalk, so that whatever he draws becomes real.   TheRedChalk.com

ACADEMY OF MOTION PICTURE ARTS AND SCIENCES.  Member.  Served on the Executive Committee for more than 20 years.  Started THE FUTURE OF SHORT FILM SUBCOMMITTEE
THE DIRECTORS GUILD OF AMERICA –  ASIAN AMERICAN SUBCOMMITEE

"HIDER IN THE HOUSE   Is an intelligent, gripping psychological thriller...  What makes the difference is that director Matthew Patrick has taken trouble to explore fully the background of his villain-protagonist Tom Sykes (Played by Gary Busey), and despite his violent actions there is still an underlying sense of sympathy for him.  Patrick confidently directs with a good deal of thought and intelligence."          VARIETY


"HIDER IN THE HOUSE   is one of the best suspense thrillers to come out lately.  Director Matthew Patrick extracts top-notch performances from his cast, particularly Gary Busey."  DURRANT'S WEEKLY

GRAFFITI  was one of three films out of 200 to be NOMINATED FOR AN ACADEMY AWARD - Live Action Short, ACADEMY OF MOTION PICTURE ARTS AND SCIENCES.

"See this movie!  Simply put, ATRAPADOSis one of the most hauntingly original films I've seen, right up there with David Lynch's midnight classic ERASERHEAD.  ATRAPADOS is also a front runner for one of my ten best of the year."     TWIN CITIES READER

TRIPTYCH   "Matthew Patrick utilized innovative and advanced techniques in this stunning visual and aural production that utilizes the music of Stravinsky."    HOLLYWOOD REPORTER

"Matthew Patrick is concerned with the fusion of senses and sounds in his film TRIPTYCH,an experimental sensual movie that translates body language."    LOS ANGELES TIMES

ATRAPADOS   "This is a staggeringly imaginative and gripping film."   TELLURIDE TIMES

HIDER IN THE HOUSE   Patrick resists the clichéd mannerisms and overt violence of the contemporary horror movie in favor of uneasy intimacy, diffuse lighting and intelligent characterization.  Worth looking out for."    THE LONDON REVIEW

HIDER IN THE HOUSE   Solid performances, intriguing plot and an interesting play on the 'villain or victim?' theme make director Matthew Patrick's film a delight trimmed with cunning and terror.   Gary Busey, as an ill-treated and psychopathic adult living like a fugitive in the attic above a well-adjusted family's suburban house, is infused with just the right degree of humanity and confusion; while the audience is allowed to tune into two distinct worlds, one of affection and domestication, the other of a wild isolation which craves contact."   FILM MONTHLY

ATRAPADOS    "A real hybrid - an apocalyptic, science-fantasy. For an independent film, this is not only astoundingly original, but extremely well made, and so strange it's got to be believable.  Colorful, mysterious and unlike anything you've ever seen."   CITY PAGES

I live in Hollywood with my wife, son and daughter.   We have a movie ranch in Joshua Tree.

I consider myself a citizen of the world.   From the beginning I travelled dozens of countries.  I lived in Japan for several years and spent a year in India before I was 10.  Because I did not understand the languages, I became an astute observer.  I picked up visual cues from which I could decipher a situation.

My father is of Irish and German descent.  My mother is Japanese and was born and raised in Tokyo.

I am a filmmaker, a photographer and an image creator.  I started creating visual imagery:  drawing, making flipbooks, and shooting hundreds of single frames with a Super 8 movie camera.  I became a film director, originally directing low budget films and later working my way up to multimillion-dollar movies. In those early days, I was both the cameraman and editor.  Eventually I got to hire great camera teams.  When Directing, I always set up the shots, and have the scene already cut in my head.

My short dramatic film, GRAFFITI was nominated for an Academy Award. It was a half hour yet didn’t have a word of dialogue.  I also won a Student Academy Award for TRIPTYCH, a 'motion image' film, which employed many innovative techniques.  I am a member of the Directors Guild, and the Academy of Motion Picture Arts and Sciences, where I serve on its short film, feature animation Executive Committee.   My work has been screened multiple times at the Museum of Modern Art in New York, at the Kennedy Center in Washington, DC and at the Museum of Fine Arts in Boston.  I was awarded an NEA independent filmmaker’s grant.  I also won a slot at the Sundance June Lab as a Director.

Along my journey, I’ve taken thousands of photos, exercising my eye, developing several distinctive styles.  I have always carried a small camera with me, starting with a Rollei 35mm to capture what I see in the street.  I also have a futuristic project about a utopian village in the desert.  It's a media franchise concept.

20 years ago, I purchased 100 acres of Joshua Tree wilderness.  It's amazingly beautiful, and is a environmental art palette for me.  I project colored lights onto the boulders to create a unique environment.  JTparadise.com is also a popular film/photo location, (Calvin Klein, Brooks Brothers, Paul and Joe).

I also have the Goddess Bunnie book project, where I’ve been shooting portraits of Sandie Crisp, for over 20 years.  She is a notorious figure in the Los Angeles underground art scene, and the strongest person I know.  She’s a physically disabled pre-op transsexual, performer and MC.  Sandie tells a powerful story of surviving and thriving against all odds, fighting to be who she is, with dignity and humor.

I live in Los Angeles with my wife and two children.  In many ways I consider myself an east coaster having resided in Connecticut, Massachusetts, and Manhattan.  My work can be seen at:  matthewpatrick.com and matthewpatrickmovies.com